“Aren’t you the gent from Country Dandy Quarterly?” I called out from behind the wheel to the man in the white linen suit, slouching near the short-term parking at Hagerstown Regional Airport.

“Still have time for fucking badinage?” Slats replied, sneering but not angrily.  “You going to pop the trunk or not?”

Moments later, he was arranged in the passenger seat of my post-post vintage Honda.  “I can’t believe you are still driving this thing,” he remarked.  “You know how difficult it is to travel from La Paz to Washington County?  And we have to ride in this?”

“Paid off since ’06.  And the cassette player still works. You like Billy Squier right?”

He grumbled unintelligibly, but with zest, for a few seconds before rolling down his window and leaning back to feel the highway air.

After composing himself, he sighed and asked, “You back on that board again?”

“The Wilde Lake Village Board, yes.  Got appointed to serve another term,” I responded matter-of-factly.

“You’re just jealous because I don’t get run out of town every couple of years,” I paused.  “So, what’s the latest?  You were vague on the phone.”

“Oh yeah,” he perked up, glancing around the interior of my ride, no doubt looking for listening devices or perhaps loose change.  “I need you to drive me to the airport again Thursday night…if you can…I need to be in Orlando on Friday.”

“What’s down there?  Disney contract?  Jonesing for Epcot?”

“So you are going from semi-retirement to that?  So when did the patron saint of lost causes suggest you get in touch with Governor Johnson?”

“Listen,” he said, holding up a finger for emphasis, “I’m getting a good month-by-month flat rate, a win bonus if he gets the nomination, and a deal where I get a nice structured pay-out for every million votes he gets over 2 million in the general.  And if he wins…”

“A dresser full of ascots?” I interrupted.

“Oh ye of unrefined sartorial sensibilities,” he shook his head, continuing. “You have two polarizing presumptive major party nominees with high unfavorables.  Clinton will run base-plus with heavier outreach to Latinos as well as independent and moderate Republican women.  Trump will try to consolidate the Republicans who can stand his bombast and trade policy heterodoxy as well as drive up votes among white blue collars who might otherwise tune out of this election.  Both, right now, are weaker among Millenials, who are a natural libertarian constituency. You combine a social progressive with fiscal restraint in one candidate, get Johnson on the debate stage with those two, and the dynamics can flip overnight.  Say what you want, Johnson is ten times more qualified than Perot was, and twenty times saner.”

“So what’s in it for you long-term? If you serve in a Johnson Administration, doesn’t that mean you have to move back to the States?”

We both fell into silence, focusing on the road. Heading eastbound on 70, with the sun setting in my rearview mirror, the prospect of Secretary MacCune was undeniably absurd, but only 99.9% impossible in this freakish year.  The margin that was left was sufficiently disquieting for the remainder of the drive to Columbia.

Posted by Spartan Considerations at 9:55 AM No comments:

There is an isolated society in Bolivia, numbering no more than 600 souls, who dwell three hours away from Riberalta when the roads are passable, six when they aren’t.  They believe that we die every night, during our dreams, and we awaken into a parallel universe where everything appears to be a continuation of the same existence.  It is our dogged persistence of memory, they claim, that makes it seem as though this continual passing and renewal is nothing more than a short recess from our consciousness from the same life we had the day before.

Every so often, especially when tumultuous events occur, it feels as though they might be onto something.  Let the physicists & theologians sort this out.  God help us if the mathematicians get involved though.  This surly bunch of data-set grinders will bog the entire process down.

But mathematics does have its uses.  For example, as of this writing, it tells us that the itinerant Stateswoman, aka the One True Sage of Chappaqua, Hillary Diane Rodham Clinton stands at the precipice of claiming the Democratic nomination for the American Presidency.  The New York Times delegate tracker says she has 1,768 pledged delegates along with 525 unpledged (aka Super-Boss) delegates.  Employing a simple mathematical function, that works out to 2,293…or 96.2% of the total number of delegates required for a simple majority at the Democratic Convention.

With 930 delegates remaining up-for-grabs, it is likely that she will far exceed the 90 delegates she needs to hit the magic number of 2,383.  Barring a cataclysmic shift in the tectonic plates that undergird our politics in 2016 anno Domini, it is extremely unlikely that her only remaining foe, the at-times blustery Senator Bernard "Bernie" Sanders will win enough of the pledged delegates and sway enough of the unpledged delegates to wrest the nomination away from the former FLOTUS/Senator/Secretary of State.

How high a hurdle?  Sanders would need to register huge wins in states like California and New Jersey, blow-out landslide margins north of 70%, in order to stand a chance of significantly diminishing his pledged delegate deficit (currently 274 delegates).  Beyond that, he would need to convince the Establishment Democrats that he would not be tossed like dry maple tree branches into the industrial wood chipper that is the Trump Attack Machine.  The safe money, for these solons and activists, is to stay the course with Hillary, even if she stumbles badly on June 7…which appears unlikely.

I appreciate the hard-fought effort against long odds.  I think former Ohio State Senator Nina Turner, in particular, has been an excellent Sanders surrogate and, contrary to the opinions of some, has a future in electoral politics, if she chooses that path.  I think his movement will live on.

However, as each day passes, the parallel universe options for the Sanders presidential campaign all appear to be similar, with June 15, 2016 being the effective end of the road.  They get this in certain parts of Bolivia...but will Sanders and Company?

Where Will You Go, Joe?

“Joe Biden is gone now…and we are all a bit poorer for it.  He was a player, and we need those people in politics.  They are the ones who have defined us to ourselves as a nation of leapers and dreamers and risk-takers, and awesome world power with a lover’s sense of adventure.” – H.S.T. (September 28, 1987)

Much has transpired since John Sasso (of House Dukakis) plunged the long knives into the heart of the Biden ’88 campaign.  Granted, Joe left himself open to the assault; and Sasso himself endured a temporary exile for his deeds.

But it ended Biden’s last great look at the Oval Office.    He passed on ’92, ’00, and ’04.  His 2008 campaign went nowhere except insofar as it helped convince then-Senator Obama that his colleague from Delaware would be a darn fine Vice President, thus leading to the ticket that secured 365 Electoral Votes.

Sure, Biden had a voting history that might not endear him to the Left, but Biden-Warren would have made for a formidable Democratic Unity ticket, or Warren-Biden for that matter.

It’s a shame that the 2016 Democratic Convention will nominate zero Bidens for national office.

The default setting in the party now, as it was in 2007, is Hillary Clinton.  She simply has a higher ceiling this time around, and more favorable conditions to win the nomination (diminished Clinton fatigue, weaker primary competition, and a slightly better candidate skillset).    She may inspire millions, but the gnawing concerns linger for many.  Will another Clinton presidency bring four to eight years of Clinton mishegoss?  Anyone with half a pulse during the 90s knows exactly what I am talking about.

The tragedy is that there really wasn’t a great Democratic alternative.  Red state/blue state calculations aside, our 50 States (and DC)…with perhaps a couple of exceptions… are comprised of electorates that net out as pro-free market, usually by overwhelming margins. A decidedly hypothetical Trump- Sanders race would devolve into a capitalist – socialist debate that Sanders could not win.

For many this cycle, including this author, a vote for Sanders was a vote for a message and not the candidate.  He is no longer running for the nomination, despite what his campaign says, he is staying in to realign the Democratic Party for 2017 and beyond.  The Corporate Democrats are in the catbird seat, and many populists, blue collars, and liberals are none-too-happy about what this might mean for American jobs.  Sanders got this, but he was/is a flawed vehicle for their hopes and dreams.  And while Vice President Biden doesn’t check all of the Progressive boxes, at least he can speak the language…and he could have won.

Posted by Spartan Considerations at 8:00 AM No comments:

Issues with a "Survey"

So I checked out the following HCPSS post today, "Board Seeks Public Input for School System Budget Cuts."  I am providing no link as I am not encouraging anyone to take this "survey."

I still don't know precisely who crafted the instrument or if they have a background in public opinion research.  A few elements struck me as off.  Let's look at what is posted: 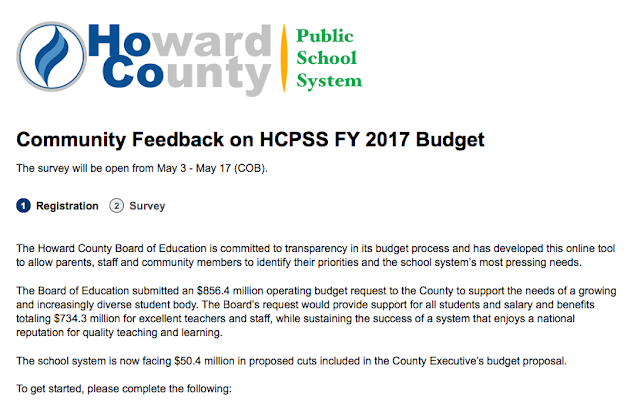 Where to begin?  At least the sponsor of the study is identified.  That is nice.

Of course this "tool" is not being fielded using a randomized sampling method, it will not yield statistically significant findings that are projectable to a larger population.  It is completely based on self-selection. So why bother calling it a survey?

Beyond that, the language is leading.  They shouldn't be patting themselves on the back in the introductory paragraph, as it injects bias.  Even a subtle shift would have helped, something to the effect of, "In accordance with HCPSS' commitment to transparency in its budget process, the Board of Education has developed, etc..."  Frankly, the whole transparency claim here is extraneous.  It reads like posturing, not the beginning of a research instrument.

Then it goes on to frame the two proposals.  It is not a bad idea to provide some context.  That said, this introduction appears to praise the BOE request, placing it in the most favorable light, while essentially saying the County Executive's plan would gut education funding in our County.

Careful, and sloppy, readers of this blog know that this author is not a Kittleman supporter.  But come on, try to present a more even-handed case for the CE's proposal.  Say how it represents $18.1 million more in funding compared to the previous year.  You could even ding his plan (factually) for being just slightly above the state's minimum funding requirements, but just saying how it is $50.4 million in proposed cuts is sticking one's thumb on the scale.

Is there a guarantee of respondent anonymity?  No. Which should be disconcerting to many.  In fact, there is this lovely part of the tool, before the substantive questions appear: 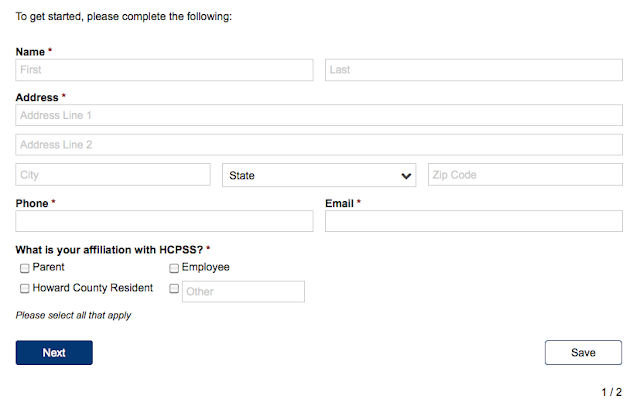 So this makes me wonder.  Will folks at HCPSS see my answers attached to my name, address, etc... or are they going to disaggregate my identifying information from my responses? Who all is going to see this?  Is the data going to be collected/analyzed by a third-party? If so, who?  Will the Board of Education know that I responded...and how?

I didn't go any further as I did not want to input my personal information.  Frankly, I think the set-up they have is a tremendous disincentive to participate. Perhaps that is what they want, I don't know.

Gathering insights from the community is fine (and appropriate), but trying to use a tool that implies a certain measure of scientific rigor, without actually following proper practices regarding wording and data collection, strikes me as problematic.