The Race for Speaker

Editor's note: what follows is the First Guest Op-Ed in Spartan Considerations history...unless you count the pieces crafted by S. MacCune, of course. And why would you not?  While this piece does not necessarily reflect all of the opinions held by the present author, it is nonetheless thoughtful, engaging, and timely.  Enjoy!

When 15 year veteran of the House Speakership Mike Busch (D, D30) passed away on Sine Die Eve, the grieving was nearly unanimous. Almost immediately thereafter, the long time whisper campaign for Speaker turned into a battle of votes. The Chair of Appropriations (Maggie McIntosh, D43), Chair of Economic Matters (DereckDavis, D25), & Speaker Pro Tempore (Adrienne Jones, D10) all announced their candidacies, but Jones & Davis had a meeting to “form an alliance” and unite around Davis, following Maryland Democratic Party Chairwoman Dr. Maya Rockeymoore Cummings demandingthat Democrats follow the vote of the Democratic Caucus on May 1st or face increased costs for party services.

While McIntosh is purported to have the votesto get the endorsement of the Democratic Caucus, that is no guarantee for her to become Speaker. Progressive groups, unions, and the MDP Chairwoman are demanding that Dem delegates support the choiceof the Democratic Caucus, as there are murmurs that Republicans may form a bloc to support a candidate a la the IDCin New York’s Senate. There is no precedent nor reason to build a coalition government with a Democratic supermajority. When taking questions after the press conference, Davis said that he is not considering Republican Vice Chairs, but he is “not focused on” the potential of a coalition Speakership with Republicans. He also promised to work with “all caucuses” and “in a bipartisan fashion”.

Prince George’s County Council At-Larges Mel Franklinand Calvin Hawkins& Delegate Darryl Barnes(on behalf of the Legislative Black Caucus) haven’t outright endorsed Davis but have complained about the “threatening and bullying” coming from the MDP Chairwoman regarding higher costs for party resources for those who align with Republicans. 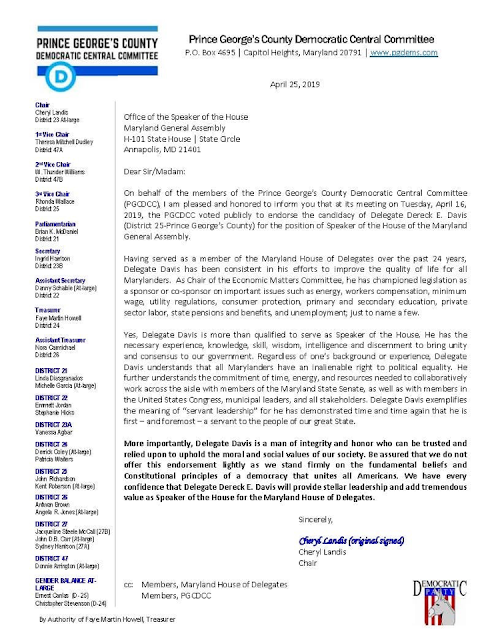 At present, the Speaker of the House picks the Committee Chairs, the leadership, and sets the legislative agenda for Maryland House Democrats. It is a very powerful position with almost no democratic accountability. With the first opportunity to elect a House Speaker in over a decade, Maryland Democratic voters deserve increased transparency & democratization within their Caucus. These are demands of our next Speaker.

Mike Busch was Speaker for over 15 years. He oversaw a rapid transition where there are now multiple democratic socialists within the Democratic Caucus. He saw the power centers completely change. And there’s no reason any other Delegate should be in charge of the rodeo for that long ever again. The House Speaker is particularly powerful and should be voted on each session, with 8 year term limits for all future House Speakers and Committee Chairs.

The Speaker’s race has been a whisper campaign among Democratic insiders for years. Most voters don’t know who occupies the position, let alone what they do. Why isn’t there a public forum every year to ensure that the Speaker hears from Democratic voters all over the state, rather than just special interests? This race needs visibility especiallybecause it is often chosen by whoever can donate the most to other electeds. Both McIntosh and Davis have been campaign transfers to other electeds for years, specifically to curry favor for the Speaker’s race.

Every year, the Speaker needs to introduce a concrete policy platform that will deliver results to everyday Marylanders. With a supermajority, the Speaker should be able to pass all of their desired legislation in any given year, at least in the House. This concrete agenda will also put pressure on Senate Democrats to pass legislation.

When speaking with elected officials about working with the Speaker’s office over the past few years, one name is always mentioned: Alexandra Hughes. Hughes worked for Busch since he became Speaker and has been noted for her ability to hold a grudge and strike back at legislators. This was specifically mentioned this year in regards to HB1052, stripping the Comptroller’s Office of alcohol and tobacco regulatory ability, when delegates were threatened not to vote against the bill. The next Speaker should replace Ms. Hughes with a staffer who has better relationships with other delegates and ensure that their staffing looks like our state’s residents.

Annapolis staffers are underpaid, overworked, have a very stressful work environment, and have little recourse for wrongdoing by their bosses and employees. These staffers have to work for 3 months of the year and find temporary jobs after session or work for campaigns full time, a very rare job. If Annapolis staffers were unionized, they could collectively bargain for fair wages, better hours, avenues to justice in cases of mistreatment, and health insurance. This includes the janitors, the cafeteria workers, the security guards, the researchers in DLS, and every other person working in Annapolis.

If this year ain’t show it, none ever will. Annapolis is a town of partying politicians as much as it a town of legislative activity. Rumors abound of married legislators cheating on their spouses (often with other elected officials and lobbyists). Sexual harassment and sexual assault. Pay-for-play. An “omerta” culture. And nothing can be done about it unless enforcing ethics is de-politicized and in the hands of independent actors, not elected officials.

In Maryland politics, State Senator Thomas V. “Mike” Miller Jr. has been the most powerful elected official for decades, even though voters have no clue who he is. The positions of State Senate President and House Speaker are both so powerful in a state with guaranteed super majorities that we should consider making them statewide elected positions during the primary. With a rapidly changing Maryland Democratic Party, what is a better way to ensure that the leadership is following the demands of voters?

Stop and think about how many news sources we have in this state. The Sun, WashPost, the Capital Gazette, the Daily Record, & a smattering of well-written blogs that go straight to email like DMVDaily News & Maryland Matters. Prince George’s County, larger than several states, has no weekly newspaper dedicated specifically to local issues. Now that the House and Senate are beginning livestreams, we need to ensure that Marylanders can hear what is happening in Annapolis and how it relates to their day-to-day lives. The next Speaker should be committed to opening up Annapolis to press.

If you ain’t hear what Delegate Lisanti said, just Google her. Mary Ann Lisanti is a lame duck legislator who, as of last session, had no committee nor subcommittee assignments. She can’t represent her district in Annapolis. She’s been asked to resign by dozens of organizations. She has no plans to resign yet is still being paid and has an office and staff.

She should be expelled for not just her disrespectful language, but also her lack of concern for the decorum of office that’s been disruptive to Annapolis.

This past session, Speaker Busch was pushing for a constitutional amendmentto protect reproductive rights in Maryland. With the Supreme Court now having a conservative majority and no guarantee that a Democrat wins in 2020, we should protect these rights within Maryland as strongly as possible.

Within Maryland, there has been a recent push for right-to-work laws. Unionization rates, especially in the private sector, are falling. The Fight for $15 billhad enormous cut-outs that will negatively impact the most vulnerable Marylanders. What can we do about this? We can ensure that all Marylanders have the right to join or form a union. Maryland can be one of the most progressive states in the nation on labor with this right coded into the Maryland Constitution.

Ballot initiatives have been notoriously difficult in Maryland, as they need legislative action to be possible. If the same rules that apply for Baltimore City initiatives (10% of voters in the previous gubernatorial general election) were applied to the state, think about how much legislation could pass in this state. Recall elections would make it easier for Baltimore residents to remove Mayor Pugh under her current scandal, or others legislators found to be unacceptable by their voters. With political power in the hands of the voters & the residents, we can completely change this state’s political culture.

-      Richard Deshay Elliott is a Political Science Ph. D candidate at Johns Hopkins University, a former electoral fellow for Progressive Maryland, and campaign strategist with Chris Ervin for Baltimore City, District 5. You can find him on Twitter at @RichElliottMD& Facebook.

Posted by Spartan Considerations at 2:10 PM No comments: