Poor/illegal political sign placement can be a pet peeve for some voters.  Prior to Election Day, I tend to cut campaigns a certain measure of slack on this, especially if the issue appears to be isolated.  Why?  Well, sometimes campaign signs for Candidate A are re-located to questionable spots by folks who aren’t affiliated with Candidate A.  This can be done for the purpose of fomenting outrage against the unknowing Candidate A.  Of course, this (along with the less elegant technique of simply trashing such signs) is completely unacceptable behavior.  That said, it is now well past Election Day and I am still seeing campaign signs up in the heart of Columbia, they should come down for a while.

Shifting the focus...people have asked me questions such as, “how many readers visit your blog?”, “what topics are read about most often?”, and “how can I get in touch with Slats?”  I will take you behind the scenes and answer the first two questions for you here.

According to the site statistics, as of this writing, I have received 93,536 page views since I launched Spartan Considerations in March 2014.  The readership numbers have been trending up, with 13,369 views in past month alone.  All of the top-10 most viewed posts were published this year (each with 898 or more pageviews), five of them were written in June 2018.  Three of the top 10 have more than 2,300 pageviews, one focused on a recent Board of Education candidate while the other two centered on a former Board of Education member/recent County Council aspirant.  Here is a screen-capture showing some of your favorites: 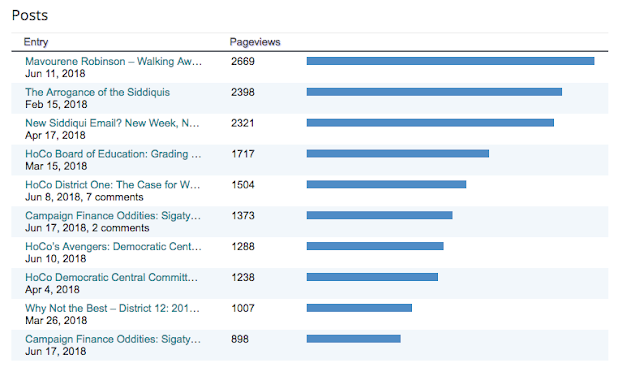 Who are your fellow readers?  Primarily (but not exclusively) Howard County media and policy-attentive elected officials, staffers, activists, community leaders, and engaged citizens.  I have some friends in other counties, states, and countries that I am proud to count amongst the readership, although some of the topics might seem rather esoteric to them.

I suppose this is my way of expressing my gratitude for those who visit Spartan Considerations for our blend of analysis and advocacy.  With diminishing mainstream media resources dedicated to local politics and public affairs, and with some Howard County-based content producers opting for non-written word platforms (such as podcasts), I am glad that those who are “in the know” continue to take the time to peruse the Text.

Coming up:  thoughts on the national scene, Wilde Lake development, the County Executive race, a look at the D1 outcome, and yes, some guest commentary penned by Mr. MacCune.

In solidarity.
Posted by Spartan Considerations at 3:53 AM