First, look below.  Has anyone else received this email?

While I received this from multiple sources, I cannot verify the authenticity of it.  I do not know if it, in fact, came from Nayab Siddiqui.

1) a willingness by the email's author to pay the Columbia Democratic Club membership dues for other people, apparently for the purpose of enabling such individuals to vote for Janet Siddiqui at the upcoming CDC endorsement meeting (see the last paragraph of the email, below).

2) an apparent recognition that, if this offer were to become widely known, it would reflect poorly on the email's sender ("Please restrict distribution of this email.").

This email reads like an attempt to buy votes and thereby manipulate the Columbia Democratic Club's endorsement process.

If this email was fabricated, the author should come forward and admit it.  If this is a legitimate email sent out by Nayab Siddiqui on behalf of Janet Siddiqui's campaign, he should admit it and Dr. Siddiqui should immediately withdraw from the Howard County Council - District 4 race.

Encouraging supporters to come out to an event is one thing.  There is no place for pay-to-play vote rigging in Democratic politics.  This email exemplifies precisely the sort of political avarice that we don't need in Howard County.  We are the Party of the People, not of elite private interests.  This behavior can not and should not be tolerated. 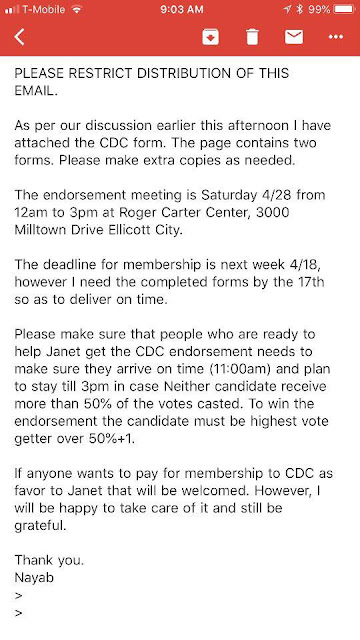 Posted by Spartan Considerations at 8:39 AM