Let’s revisit the text, shall we?

“Congress shall make no law respecting an establishment of religion, or prohibiting the free exercise thereof; or abridging the freedom of speech, or of the press; or the right of the people peaceably to assemble, and to petition the Government for a redress of grievances.”

So why is David Yungmann, the Republican nominee in the 5th Councilmanic District, sending out a flier where he is highlighting his role as someone who “led opposition to huge school/mosque in the rural west?”  See below...

One would think Mr. Yungmann would be an uncompromising champion of religious freedom, isn’t that what the GOP is running so hard on these days?  So from a campaign narrative perspective, even if he had development size concerns, why would he be so quick to tout his opposition to the construction of a school/place of worship in western Howard County?

Mr. Yungmann needs to answer as to why he lists his opposition in this case as one of his top five significant accomplishments in this piece.  Presumably, other experience points could have been selected.  Why did he choose this one?  What message is he trying to send? To whom?

Moreover, I believe Mr. Yungmann was an ardent supporter of Christina Delmont-Small and Vicky Cutroneo when they both ran for the Howard County Board of Education in 2016.  Where do they stand on the issue?  And what do they think about Mr. Yungmann’s decision to include this specific information in his campaign literature? 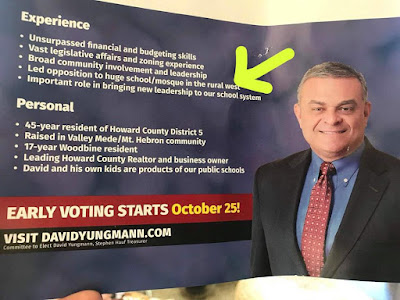 Posted by Spartan Considerations at 8:06 AM